Mock Turtle Soup: "Tongue and Cheek" Cookery in the Chesapeake

Turtles have historically been a very important part of the American diet in the 18th-19th centuries. Most species of turtle are edible but the one that was most highly prized and therefore most popular in and around the waters of the Chesapeake Bay was terrapin.

Terrapin is a small edible turtle found along the coastal marshes of the eastern US. It was an important part of the diet for people living along the estuary of the Chesapeake Bay in Maryland going back to the early days of settlement, and even further back to the Native America Indians who inhabited the region.

According to documentation found in the America Eats project (a project funded by the Works Progress Administration during the Great Depression to record American culture among other things), slave indentures in Maryland bore the stipulation that terrapin should not be fed to the slaves more often than twice per week on the grounds that it was so easily obtainable that slave owners would deprive their slaves of other types of flesh meat to save money. Not surprisingly, based on easy access and its general popularity, the terrapin population was drastically reduced by the end of the 19th century. Nowadays, legislation protects the terrapin from further decimation.

Prior to the days when legislation curtailed the harvesting of turtles, they could have been roasted whole in hot coals; however, the preferred way of serving them was to make them into a rich soup. Historic cookbooks in the Chesapeake region and beyond contain many variations for making these types of thick, rich soups.

Here is a recipe published in a Baltimore cookbook called Domestic Cookery, Useful Receipts and Hints to Young Housekeepers from 1869 by Elizabeth Lea: 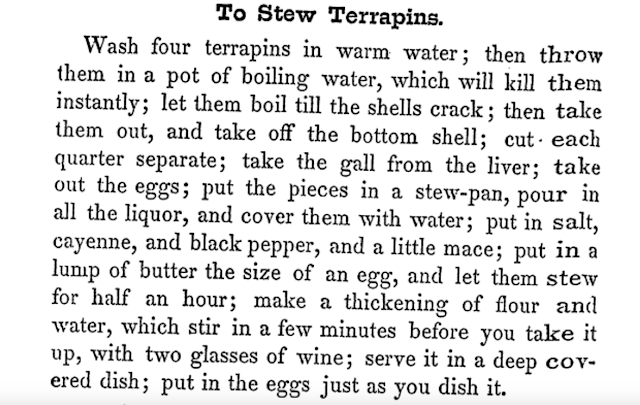 Here is another recipe from Fifty Years in a Maryland Kitchen by Mrs. B.C. Howard, 1944. I love how the author remarks that experts consider the soup the best, but the editor does not!  Here is her recipe: 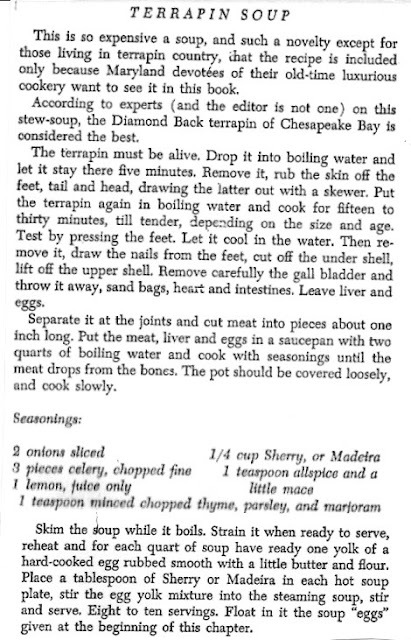 Here is a very straightforward recipe for making a basic turtle soup from 300 Years of Black Cooking in St. Mary's County, Maryland, Published in Cooperation with the 350th Anniversary Committee of St. Mary's County and the Maryland Heritage Committee, 1983 edition: 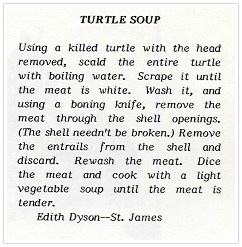 After looking at these recipes and many other versions of turtle soup, it is clear that there are two distinct ways in which this dish was made. First, the most popular method throughout the 19th century was to make a dark, rich gravy-like broth. These types of soups often contain some or all of the following ingredients:

Second, I did find some twentieth century recipes in which the soup has a cream base. However, according to The Amiable Baltomoreans by Francis Beirne, 1951, “Philadelphia, too, is a terrapin city. But to the horror of Baltimoreans, Philadelphians serve their terrapin with a cream sauce! At least such is the scandalous report in Baltimore.”
Nevertheless, blasphemous cream-based recipes for turtle soup can be found in Helen Avalynne Tawes iconic 1964 cookbook, My Favorite Maryland Recipes and another from Maryland's Way, The Hammond-Harwood House Cook Book from 1963.

Turtle Soup in Baltimore Eating Establishments
Here are some advertisements from Baltimore eating establishments in the 19th century offering variations of turtle soup:

When turtle/terrapin was unavailable either by logistics or economy for making “Real Turtle Soup” as it was often referred to in period recipes, the enterprising cook could make a mock version of it using a calf's head. According to an experienced turtle soup maker and eater in Louisiana in a 2008 article in The New Yorker, “You got seven kinds of meat on a turtle. Depending on what part you’re eating, it will taste like turkey, or fish, or pork, or veal.”

I've taken the phrase “tongue in cheek” which refers to not taking things seriously (hence "mock") and re-worked it to "tongue and cheek" to relate to using tongue and cheek meat to mimic the flavor of the turtle soup with an imposter, a calf's head. The meat extracted from the tongue and the cheeks, along with the collagen-rich stock made from the rest of the head gives this soup its rich flavor reminiscent of turtle.

Indeed, even the first cookbook published by an American in 1796, American Cookery, by Amelia Simmons, contains a recipe “To drefs a Calve’s Head. Turtle fashion”: 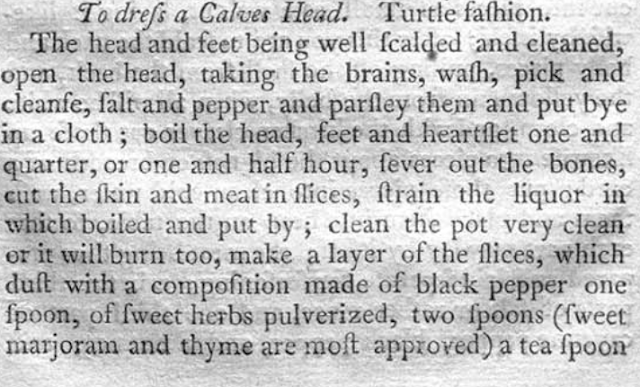 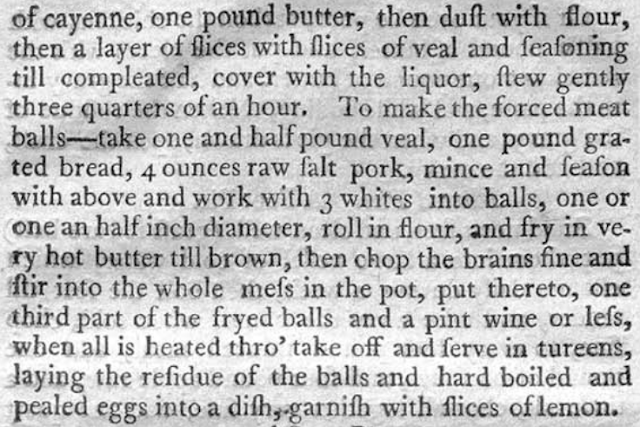 When looking at many mock turtle soup recipes, you can definitely see how they were made to replicate real turtle soup recipes. The following ingredients and instructions represent the ways in which this soup mimics the real deal:

(Note: this recipe uses a calf's head which means that it makes a lot! You can substitute with veal stock and half or quarter the recipe, as needed.)

Step 1: Making the Stock from the Calf's Head

Ingredients:
1 Calf's Head, Halved or Cut in Thirds (mine came from Marcho Farm, an organic farm in Pennsylvania that prides itself on the ethical treatment of its animals) Make sure the brain and eyeballs are removed prior to cooking.
¼ Cup Apple Cider Vinegar
1 Tablespoon Salt