Those who have spent even just a short time in St. Mary's County in Southern Maryland would have heard of, if not tasted, the classic traditional stuffed ham.

What is the Stuffed Ham Recipe?

What is the History of the Maryland Stuffed Ham?
The Stuffed Ham is one of those dishes that goes back so many generations that its precise origins are lost. It is a recipe that has largely been passed down through oral tradition; no pre-modern written recipes exist.

Here are Some Theories as to the Origins of the St. Mary's County Stuffed Ham:

The Recipe
I have an extensive collection of cookbooks published in Maryland by Marylanders. Some were authored by professional chefs, some by professional cookbook writes and a lot (most) by religious and/or civiv organizations for fundraising purposes. In all of the dozens of cookery books I have, there are really only two that have recipes for this ham dish.

In Frederick Philip Stieff's 1932 publication of Eat, Drink & Be Merry in Maryland stuffed ham is described as follows:

"Hams of twelve pounds or more are best to use for 'stuffed ham,' a popular dish with Southern Marylanders, particularly at Easter. The ham to be used is best when less than a year old.

For a sixteen-pound ham use one peck of greens: cabbage sprouts, turnip greens or kale, two dozen bunches of spring onions or their equivalent in chives, red and black pepper and celery seed.

Allow fifteen minutes per pound after the ham starts boiling and cook steadily until three-fourths done. Then put aside to partly cool while the greens scald in the ham liquor. When well wilted, take greens up and chop well. Season the greens with celery seed and pepper to taste.

Then with a sharp knife cut crescent-shaped openings in the ham, top and bottom, as deep as the knife will go. Stuff the mixture of greens in the incisions, as much as they will hold. Make as many incisions as the ham will conveniently take.

Fold in a stout cloth and sew fast. Replace ham in the boiling liquor for the remaining quarter of the time allowed for cooking. Cool in the liquor, and when thoroughly cold, it is ready for use. Keep cloth on the ham to preserve the moisture and keep in a cool place. It is truly a dish for the gods.--Mr. J. F. Coad, A.M. Cherry field's Manor, St. Mary's County


These two recipes are from Timeless Treasures from St. Paul's, a 1998 collection of recipes published by St. Paul's Episcopal Church in Prince Frederick, Maryland: 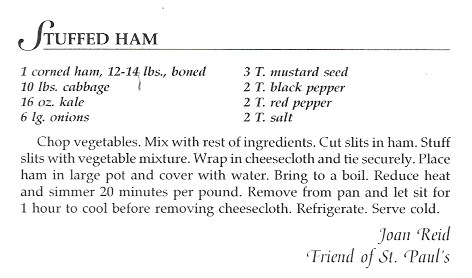 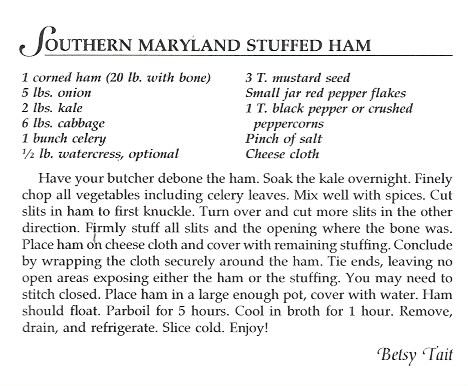 My Recipe Adaptation
Note: You will want to start this recipe about 2 days in advance of serving it. 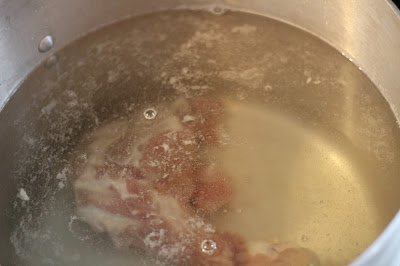